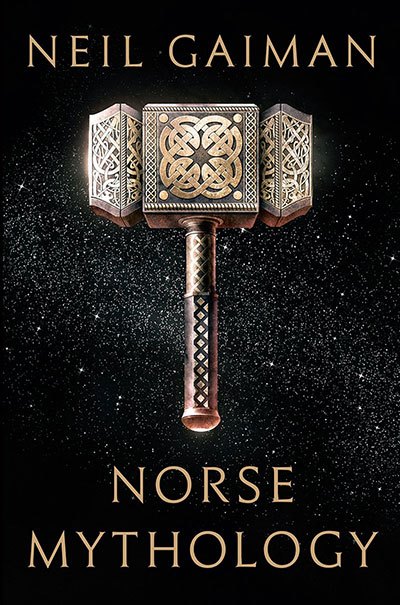 Neil Gaiman‘s novels and comics are ingrained with tales and myths. So, it comes as a no-brainer that he would gladly take on Norse mythology to retell the stories of Odin, Thor, Freya and Loki, how they were born and how they perished during Ragnarok, these ancient gods’ Judgement Day, as the author puts it in the foreword. Especially when you remember that Odin was at the center of Gaiman‘s masterpiece novel American Gods, recently adapted for TV on Starz, or that he already wrote a children’s book called Odd and the Frost Giants. Even the Wall that separates the human world from the faerie world in his fairy-tale like Stardust echoes that of Midgard’s wall in Norse mythology.

Therefore, the question was: how would Neil Gaiman make these old stories fresh again? Which writings and sources will he take as a reference? Would he put his own distinctive storyteller voice to these myths without really adding anything to them, matter-of-factedly? Or would he embrace the whole creation process and weave new events to the ones already told hundreds of times through the ages? The answer would be the latter, even though the assumption that any author could work on a collection of ancient tales without adding or creating anything new would be pretty damn naive. We will get back to this particular debate later in this review, but the fact is that by simply telling a story you’ve read or been told, you’re already turning it into something new. You’re putting your spin to it, and the storyteller’s voice, his ability to weave his tale thread by thread, is what will make the whole thing valuable or not. This will determine how these ancient myths and famous but elusive characters will resonate with readers or listeners in present and future times.

Neil Gaiman‘s 300-page book, soberly titled Norse Mythology, was published in America by W. W. Norton & Company, the famous publishing company behind the beloved collection of annotated classic books and fairy tales, such as The Annotated Brothers Grimm. The fantasy author wrote it with the idea of paying a tribute to the stories that made him dream as young as the age of 7, when he discovered Thor, Loki and Odin in Stan Lee and Jack Kirby‘s Marvel comics. It was back in the 60’s, and thus his passion for all kinds of myths was born and would become fully part of his fabric as a writer, along with Lewis Carroll or C.S. Lewis classic novels.  As we will see, Norse Mythology acknowledges this and resonates as a tribute to the art and pleasure of storytelling itself.

Back to the present: Gaiman was born and raised in the 60’s, but today’s young generation has been fed with superhero movies rather than the old myths and stories, or even the old-fashioned DC and Marvel comic books which appeared in the post-war era. The English writer knows it, and plays around with the way we picture these characters. There’s a lot of humor throughout, and some of Loki’s witty lines could have been written by Joss Whedon for the first Avengers movie, while you could almost picture good muscle boy Chris Hemsworth say some of the words that Gaiman puts in Thor’s mouth. However, Norse Mythology is full Neil Gaiman in spirit, as readers will recognize his sense of humor and powerful sense of storytelling, which lies in a deceptively simple and straightforward style. He also respects closely the stories of those characters, choosing 14 tales among the voluminous Norse writings, and presenting them with a sense of chronology (somewhat), even though a lot of them can be read independently, if you except the opening and closing chapters.

A retelling filled with poetry and humor

The introduction, « Before the Beginning, and After », tells the reader about what would be Genesis’ Norse counterpart. With a beautifully poetic, almost melodic prose, the narrator defines the confines of the world ‘before the beginning’: Niflheim, the land of ice and darkness to the north, Muspell, the land of fire and embers to the south, and the big gap of nothingness that will become the world thanks to Odin and his brothers in the middle, with frost giants living at the edges of the world. It is a fascinating vision, beautiful and terrible at the same time, with Giant Ymir’s body, the father and mother of the first gods, including Odin, being used by his children to make the sand, the seas and the sky. The way Odin breathes life into logs to turn them into ash and elm trees, is reminiscent of Celtic mythology and of Tolkien’s Lord of the Rings if you think about living and walking trees. Except the trees become people, respectively the first man and woman, which makes them the father and mother of all humankind after Odin, the ‘Father of us all’.

This poetic and somewhat understated introduction creates a surprising yet delightful contrast with the very humorous lines, remarks and sentences displayed by Neil Gaiman‘s throughout the book. The storytelling is well balanced, in the sense that humor doesn’t downplay the violence at the core of these myths. As American TV channel Starz put it in their trailers and posters promoting American Gods, « The Gods are violent ». Gaiman chose to retell some of the original tales of Norse mythology, and he sure couldn’t avoid this particular truth, which is part of these stories about life, death and rebirth: Loki shaves Sif’s hair in her sleep and later, the gods will slay his children and condemn him to unbearable torture until the end of days, with his wife at his sides. These are merely two examples among numerous episodes of mischief and murder.

Yet, there’s still the idea that gods are not just plain good or evil: even the ones we might consider to be the ‘righteous ones’ can do terrible things, while Loki, with his sharp tongue and cunning spirit, can at times appear as pathetic. He also makes a great and definitely enjoyable character precisely because he’s so unrepentant. And, just right there, Marvel‘s movies go back to the shadows of our minds because these old tales, told by Neil Gaiman‘s both modern and timeless voice, have much more depth to them than the bodybuilded and often forced narratives we get to see in the most recent superhero movies (if we except Logan, which is not part of the Avengers universe), which fail to truly embody our struggle with darkness and humanity.

The weaving of tales: a story of death and rebirth

Norse myths have come to us incomplete, Gaiman tells us as a foreword, and mostly in the form of folktales: pretty much like Odysseus, which is not merely Homere‘s work, though he collected those stories and put his own spin to it, Norse tales were transmitted through oral tradition and were made available in different versions and transcriptions. The core is always there, but storytellers through the ages made them their own, and that’s also the beauty of it all. Neil Gaiman surely thinks so as he unrepentlessly decided to fill the numerous gaps by relying on his own vivid imagination, but also encourages us to do the same. The way myths are able to inspire us to create art or poetry is, as a matter of fact, at the core of Norse Mythology, and artistic inspiration is the subject of the wonderfully funny and witty « The Mead of Poets » chapter, in which Odin seduces a beautiful young woman in order to steal from her the mead that enables anyone who drinks it with the gift of poetry and scholarship. The fact that Odin, in eagle form, is the one that distributes this gift in the end is a beautiful picture of ideas coming out of thin air, some of them becoming beautiful works, others self-indulgent poetry or, as one might put it, ‘self-indulgent pieces of shit’, depending on if the poets drank from the good mead, or the one coming comically from Odin’s ass.

Of course, when we talk about Odin and Misgard, we also think about Ragnarok, the terrible night when the Norse gods will meet their end. This last story is told in a pretty similar fashion as the first chapter, but in a way that lets the reader know that gods are doomed and that things that are written cannot be undone. The use of the future tense indicates that the end of days may not have happened yet, but will, eventually. But the writer’s beautiful storytelling of the gods’ fate is not the most interesting thing in this closing chapter. The conclusion itself is a great, inspiring and utterly moving tribute to the art of storytelling, which is a part of life. Things may come to an end, but there’s always rebirth. People die, but their stories are weaved into tales and passed down, they somehow survive and help us live and make stories of our own, the same way we build our lives along the way, step by step. Neil Gaiman, who dedicated the book to his grandson Everett and also welcomed a son with wife Amanda Palmer in 2015, is aware of this delicate balance between life and death, even more when these two births were made even more precious by personal loss. This simple but effective message of hope and resilience will surely touch a chord with a lot of us.

The stories are us: lighting the torch for a new generation

But there’s also something else the author insists upon in this conclusion: these timeless stories belong to us. They may have appeared thousands of years ago, they are still relevant, and it’s up to writers, poets and artists to use them as tools to make new stories. Because Odin, Freya and Loki are immortal, they always reappear in new forms, like all real myths do. Art historian Aby Warburg talked about the idea of survivance to explain this phenomena and Neil Gaiman found a beautiful way to symbolize this in Norse Mythology : the children and people who survived Ragnarok find chess pieces in the grass, each piece being a character carving. When the set is complete, the game starts anew: same characters, same story, but different play. We sometimes criticize or even despise works of art which use the same motifs, tell us the same stories. We tend to consider they are unimaginative. And yet, there’s a reason if we continue to use them: their fabric is solid, they talk directly to our psyche, to our soul, as Joseph Campbell emphasized it. The qualities or flaws of these works doesn’t lie in these mythic elements themselves, but rather in the way we tell them, the voice of the poet, if you prefer.

And, with Norse Mythology, what does Neil Gaiman do, one might conjecture, but encourage the young generation to find their own voice to make old stories fresh again? Beyond the author’s personal craft as a storyteller and his deep understanding of myths, which makes for a great read, this is something we can only praise him for: his will to light the torch for a new generation. In our day and age of cynicism, where we often look down on young people, he remains a firm believer.